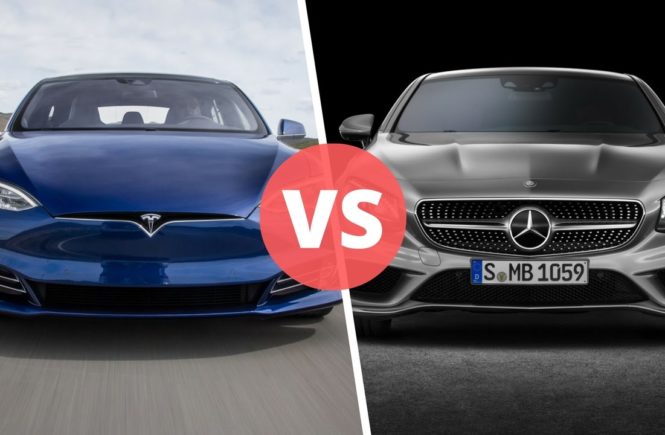 Let’s jump right into it – how does the maintenance compare for Tesla vs. the competitors.  Now like with every new car model from any brand you’re going to expect there to be some issues with the first generation of a new car model and the Model 3 is no exception. I have run into several issues after delivery with the car, but thankfully none of them are critical issues most of them are pretty minor, but I want to just go ahead and give you a rundown down the entire list of everything I ran into post-delivery and then tell you what Tesla service did to fix the issue and then I’ll wrap it up with my overall impression of the Tesla service experience.

Let’s start off with the first problem I’ve had with my Model 3.  This was only a couple days after delivery I noticed a message appeared on the Model 3’s 15 inch touchscreen on the dash that said charge port door needs service. And what would accompany this message was some really weird behavior from the charge port door. When the car was in park, the charge port door would just start opening and closing on its own at random. 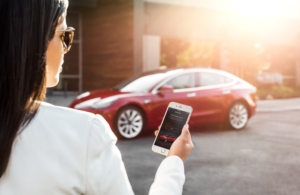 This behavior went on for a couple days and then it eventually just kind of went away, along with the message, but Tesla service went ahead and decided to replace the entire charge port door assembly. And since then I haven’t had any problems. The next issue I noticed right actually on delivery day, was this little weird crack, at least it looked liked a crack in the Model 3 screen I told Tesla Service about this.

Luckily all this turned out to be it was just a polyurethane residue left on the screen, but luckily they were able to just get that off with some cleaning solution and now the display looks beautiful. Another thing I noticed, I know there are a lot of people out there that comment on fit and finish issues with Tesla. Overall with the Model 3 I have not experienced very many of those.

The Model S I drove I immediately noticed all the rattles and things people talk about with the Model S and X’s and so far I’ve had none of that on the Model 3, in fact the only thing that I did see that was a fit and finish issue was actually with the hood alignment. What was weird with the hood was part of the hood would actually go down and the body panel part where the headlight was was actually seemed raised up a bit like the hood should be flush with that, so I brought that up to Tesla’s attention because I thought it could actually screw with the aerodynamics of the car slightly, I mean it’s not gonna make a huge difference but I was just like the hood probably shouldn’t be like that.

They agreed they said we can’t make any promises but we’ll try to fix it as best as we can and luckily Tesla Service was able to realign the hood where it was now flush with the body on the passenger side right where the headlight area was. Unfortunately, when Tesla service did realign the hood, they accidentally chipped the paint on several areas near the windshield on the passenger side of the car. I pointed this out to them within 24 hours of getting the car back and they looked at it and agreed yes, this was our bad and offered to put the car in a body shop so it could be repainted. I took them up on that offer and they did put the car in the body shop it took about two weeks. From what I’ve read on Teslas two to four weeks in a body shop is pretty typical. I couldn’t complain that much because Tesla service put me up in a P85D Model S so that was quite a lot of fun to drive around and made me miss the acceleration of the Model S once I got my Model 3 back. Those performance version Teslas are awesome.

But overall Tesla service, even though they screwed up, they really went out of their way to make sure the problem was fixed and made me feel very taken care of and the repaint on the car you can’t even tell it was repainted, it looks exactly like it did when I got it on delivery day. Now another thing that was missing from my Model 3 it wasn’t really a feature or anything like that it was actually my little red Model 3 this one out to the day one reservation holders and unfortunately I didn’t receive mine during my delivery process so I mentioned this to Tesla service they said ah that’s really not on us that’s on Tesla sales you may have to go to the sales center and talk to them, can’t make any promises. I was like yeah that’s okay I mean she’s right up the road I can go drive over and talk to them. 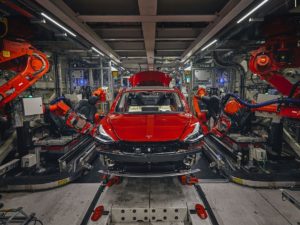 But what I received my Model 3 back from Tesla service I could see that they actually got me the red Model 3 and they put it on the dash so I could see it through the windshield.  It’s just a really nice touch for the first Tesla service experience I had as a brand new Tesla owner. Now another issue I had with my Model 3 involves the windshield wiper. One day I was just opening up the hood to try to access the front I felt a little bit more resistance than usual on the hood but didn’t think anything of it and then all of a sudden I heard this scraping noise as I continued to open up the hood and then I just heard a thing fall off somewhere underneath the hood, and as I opened it up I realized what had happened and a giant piece of metal from the windshield wiper flew off. It was either a chunk of metal or it was just the, the black paint on the windshield wiper.

Now the last issue I had with my Model 3 early on, I can’t tell if it’s a fault with the steering wheel, or if it’s just a fault on my end, but the Model 3 steering wheel seems much more susceptible to scratching than the Model S or X steering wheel. And I know I’ve now driven a Model S for three weeks since I’ve had my Model 3 at the service center and then in the body shop, and in the time I’ve driven the Model S, again I’m wearing the same clothes, same watch same everything, the steering will did not scratch at all. But somehow the Model 3 steering will just get scratches on the bottom half, I can’t tell I thought was my work badge, I stopped wearing that it would still accumulate scratches, I thought it was fingernails, I started just trimming those down, it would still get scratches. I just have no idea how it kept getting scratches on the bottom, it even came back with an additional scratch from the body shop and Tesla just went ahead an offered to replace the steering wheel which went just above and beyond what I thought they’d do.

The first time I told asked them about it, they went ahead and just repaired the scratches with a leather guy who comes to the service center, which I thought was very nice of them because they didn’t actually charge me for it. And I told them when I got the car back from the body shop, I can’t tell you if the guys at the body shop did it or it was me, because I’ve had it happen before and they were just like just don’t worry about it we’ll just replace the steering wheel, but the steering wheel material does feel different then on both the Model Ss I’ve driven, because the Model S is at least from what I can tell again I didn’t have a very new one the 100D was only, well it was maybe a couple months old, but it seemed to still be a leather steering wheel as well as the P85D I definitely know that one was a leather steering wheel and my guess is that it’s just not as durable as the material they used for the Model S & X steering wheels. Having all these small hiccups happen to my Model 3 was not unexpected. I’ve been someone who’s watched Tesla videos for years, I’ve seen the owner forums and I kind of knew what to expect going in, so none of this really rattled me and they were all pretty small and minor things that happened. None of them were really critical failures or issues with the car.

So overall I have to say that I have felt very taken care of by Tesla service. I felt that they’ve just gone above and beyond the call of duty to really make me feel like a valued customer and make me feel very taken care of. I mean they’ve repaired a steering wheel that I scratched that they didn’t do anything and then the next time a scratch appeared they’re like you know we’ll just replace it for you, they’ve they’ve just gone above and beyond with just things like that, putting in a little Model 3 in the dash, just some really nice touches as a customer that make me feel very appreciated and I know Tesla now, you know look Tesla’s not the small company they used, in the relative terms of the car industry, yeah they still are a small company, but the customer base is just growing exponentially now with the Model 3 production ramp well underway and on its way to 6,000 cars a week.

So for them to be able to still keep this experience that I’ve read about from other Model S and X owners, as someone who’s now model 3 owner, the service experience look it may not have been perfect, they may have scratched or chipped the paint on my car while they tried to fix something, but they went ahead they made it right, and they made me feel incredibly well taken care of. And it just made me proud and made me feel that I really did make the right decision in getting a Tesla Model 3, the two years was well worth the wait, the car experience is amazing and luckily the Tesla service experience has lived up to the fantastic expectations that I have come to see on owner forums and watch on YouTube videos, and reviews from other owners.

Watch this  YouTube video: Tesla vs Competitors: Cost of Maintenance Including Battery Replacement 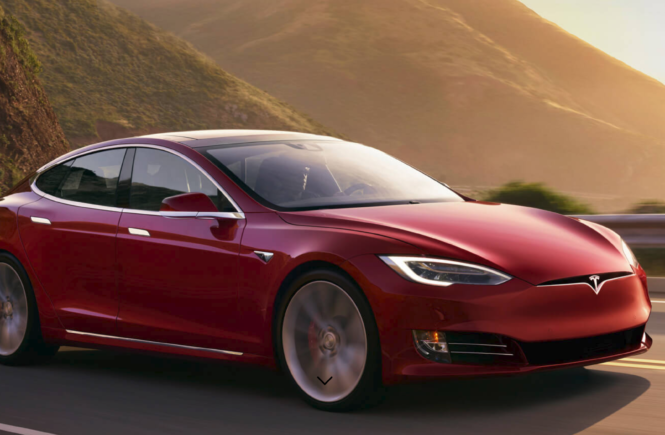 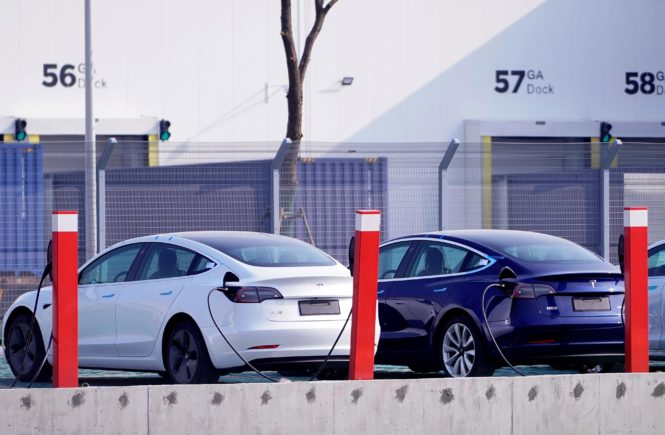